During the last 175 years, the railway system has developed in more and more rapid pace. New speed records are set and when considering a substainable development, the railway seems as the way of transport in the future.

When the European Union create the forms of the future, the key terms are lasting developement and reduced carbon dioxide discharge. In resent debates, the rail acts as the least environmentally friendly part of the railway. Large amount of carbon dioxide is created when making and replacing the railway track. 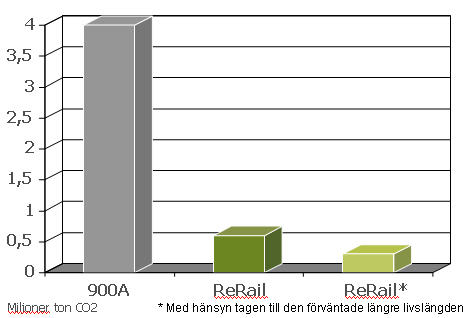 ReRail is a costefficient alternative. Increased life, less and cheaper maintenance reduce the costs significantly. The cost is calculated to be cut in half when replaceing the rail to Rerail compared to replacing the whole rail, and if the increased lifelength is considred, the cost will be reduced with 75%.

Then no consideration has been given the fact of less maintenance witch provides additional savings. The reduced track maintenance is due to the fact that ReRail prevents rail breakage as possible cracks cannot be transmitted to the rail body.

ReRail need fewer operational disturbances and reduced track maintenance, which result in less closing of the track due to maintenance and more availability compared to the solutions of today. It is also less time consuming to change the rail cap compared to changing the whole rail witch also result in greater track accessibility.

To assemble rail can be dangerous, however Rerail reduce the need for staff during track maintenance and therefore reduce the risk. ReRail increase cold resistance and reduce risk of rail breakage. Different calculation shows that it demands about 250 ton to roll ReRail, witch gives a security about 10 times. Rail fissure is often a result of rail cracks; however ReRail prevents rail breakage as possible cracks cannot be transmitted to the rail body.

ReRail have a high bearing capacity. 30 tons of load per axle (fricion 0,1).

World market – all contries that use railway systems. Cost for rail replacement, about €12 billions annually.

Because the rail is made of two components there is the opportunity for further increased performance in ReRail. ReRail makes it also possible to manufacture rails adapted to arctic conditions (hard surface, soft, weldable body – reduced carbon content.) 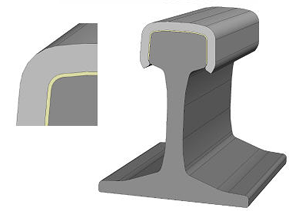 The quiet rail
By providing ReRail with an isolating tight joint of polymeric material, a decrease in the sound-level can be achieved. This application is mostly for rail in a city environment where the axle load is not to heavy. 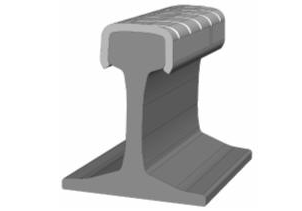 The rail with increased friction
By providing ReRail with a structured surface, see picture below, the friction between the wheel and rail increases. that can be applyed in stations where there is a leaning of the rai